Even in a part of the world famous for its love of all things tiger, Grosse Tete’s Tiger Truck Stop stands out. Located 15 minutes across the Mississippi from Baton Rouge, Louisiana, it only takes a quick glance at the truck stop’s cramped central station to figure out there’s something a little different going on.

Scattered around are the usual items of roadside memorabilia: a dimly lit fried chicken stand, rows of “support our troops” necklaces, a smattering of Louisiana State University shot glasses. So far, nothing unusual to report. But right next to the truck stop, strolling around a 3,200-square-foot wire cage, is Tony the tiger.

The animal is the latest, and most well known, in a long line of tigers at the truck stop. The 12 years he’s spent there have seen constant accusations, lawsuits and countersuits between truck stop owner Michael Sandlin, animal rights activists and government organizations. Rarely has a roadside novelty caused so much trouble, or epitomized such a clash of cultures.

A visit to the truck stop doesn’t necessarily guarantee an audience with Tony. On the day of my visit, which was miserably rainy, Tony had retired to a little kennel tucked away on the far side of his cage. Sandlin, braving the downpour as he heads from one side of the truck stop to the other, is apologetic. “He sleeps around 18 hours a day,” he says, glancing over at Tony’s soaking cage. “He is a cat, after all.” A cat he is – except that Tony eats 15 pounds daily of horse and beef muscle meat. 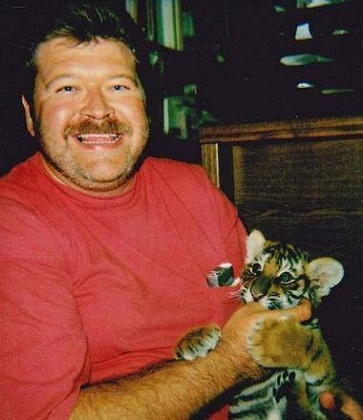 The cage itself is fairly basic: a bare concrete floor crisscrossed with wire netting, with a few separate areas for Tony to wander in and out of. It’s surprisingly big, and it certainly doesn’t look as miserable as some animal activists would have you believe; on the other hand, it’s not as large as most sanctuaries, and it’s hard to see how Tony would be able to run around and build up a head of steam.

Sandlin is a big man. Tall and broad shouldered, with slicked-back grey hair and bright blue eyes, he speaks confidently in a heavy, slow southern drawl. It’s his truck stop, his tiger and, these days, his battle.

He arrived in Grosse Tete by way of Houston in 1988. He had little money but some unusual cargo: two tiger cubs, a male Bengal mix named Toby and a female Siberian called Rainbow.

The idea for a tiger-themed truck stop wasn’t originally his – it was his brother’s – but he was the one who decided to give it a go. Baton Rouge seemed an ideal location, the town already dominated by tiger imagery courtesy of its beloved Louisiana State University Tigers football team.

For a long time, Sandlin says, things went pretty smoothly. It wasn’t until Toby and Rainbow were retired at the age of 19 – whether by choice or by force isn’t totally clear – and Tony turned up that pressure from outsiders seeking to remove Tony from the truck stop increased.

“Prior to the retiring of the first two cats there wasn’t much of a problem with animal rights [activists],” he says. “In fact, if you’d asked me 10 years ago that we would be having animal rights legislation through the Louisiana legislature in a state that claims to love tigers so much – the ‘sportsman’s paradise’ – I’ve have told you you’d be crazy. And yet today we find that’s exactly what’s happened.” 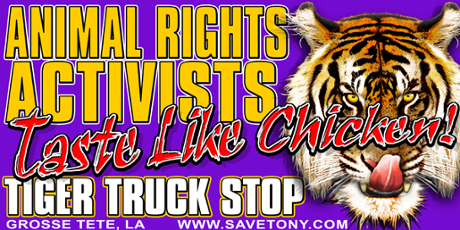 While there had been sporadic attempts by animal rights organizations to relocate Sandlin’s tigers throughout the years, it wasn’t until 2006 that any rules or regulations were put in place to aid them. That year, a bill written by a then Louisiana state representative, Warren Triche, banning private ownership of big cats passed the state senate. Tony’s existence at the truck stop suddenly became precarious.

“It’s very clear that previous owners were supposed to be given the right to keep their animals,” Sandlin says. “I assume the legislation put that in to protect the property rights and personal freedoms of people that already love these animals. It would be the right thing to do, not step in and take someone’s beloved animal from them.” The 2006 law did have a grandfather clause. Big cats legally owned before 2006 were allowed to stay with their owners, but only if a permit was granted by the Louisiana department of wildlife and fisheries on an annual basis. Permits were issued if the department felt the cats were in safe hands, and in Tony’s case they apparently did; permits were issued without much drama in 2009, 2010 and 2011. 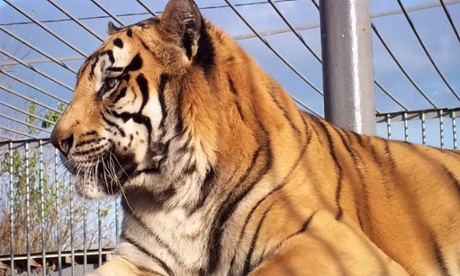 Tony in his enclosure. Photograph: savetony.com

The Animal Legal Defense Fund (ALDF), a California-based animal rights organization, didn’t feel quite the same way. They filed suit on the grounds that Tony’s standard of care wasn’t up to scratch, and in 2011 a Louisiana district court agreed, banning the issuing of permits for Tony. Next came an acrimonious series of legal battles between Sandlin, the ALDF and Wildlife and Fisheries (the latter seemingly stuck on the middle and sued by all sides) that saw permits issued and rescinded, the threat of Tony’s forced removal growing stronger or weaker with every ruling. Last year, the Louisiana senate again became involved. An exemption in the 2006 act, written and sponsored by Republican state senator Rick Ward, was carved out solely in order to keep Tony at the truck stop. It squeaked through the senate by a narrow 20-18 margin and was signed into law by Louisiana governor Bobby Jindal.

In keeping with the litigious history of the saga, the ALDF immediately filed a lawsuit challenging the exemption. That challenge, in turn, was thrown out in November. The organization is currently looking to have it refiled in another court. The future for Tony is looking as murky as ever.

Unsurprisingly, Sandlin and his supporters see it as an individual rights issue – the fight of a man who wants to keep his beloved animal in the face of shadowy governmental and activist groups determined to snatch it away. Those on the other side view it in very simple terms: for them, it’s a fight for Tony’s liberation.

“It’s pretty pathetic,” Matthew Liebman, the ALDF’s senior attorney overseeing the case, says. “You know, a truck stop is certainly no habitat for a tiger. Compared to the natural range of a tiger it’s minuscule, there’s little enrichment that simulates the natural environment and it’s way too close to the highway and the gas pumps. Tigers have especially sensitive hearing, so all the road noise, rattling trucks and all that, can be incredibly detrimental to the wellbeing of the tiger. 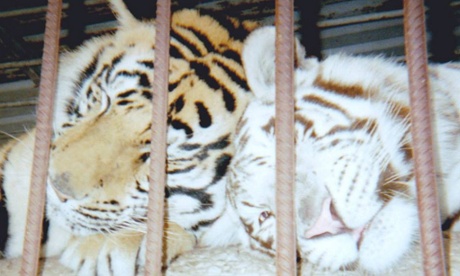 “[We’ve had] letters from people with much higher credentials than Michael Sandlin saying that [the truck stop cage] is definitely not a proper habitat even within the captive industry. The veterinary experts, the animal behaviorists we’ve talked to all agree it’s certainly not an ideal or even a very good enclosure for Tony to inhabit.”

Brittany Peet, deputy director of captive-animal law enforcement at People for the Ethical Treatment of Animals (Peta), is even more forthright. “Tony currently lives in a squalid tiny cage on mostly concrete breathing gas and diesel fumes all day long,” she says. “The reputable sanctuaries that are ready to assist Michael Sandlin in placing Tony the tiger have huge, naturalistic enclosures with grass and natural ponds, where there are acres of land where Tony could choose to have the company of other tigers if he likes. He could engage in other behavior, like running, which he just can’t do at the Tiger Truck Stop. The best place for Tony is not in a tiny cage in a gas station.”

Where to house Tony, if he was to be removed from the truck stop, is a major source of contention. Sandlin claims that all animals removed by the wildlife and fisheries department have died within two months of being taken away, although official figures appear to show otherwise. On the other hand, several places mooted as possible options for Tony have had their own controversies over their standard of care. 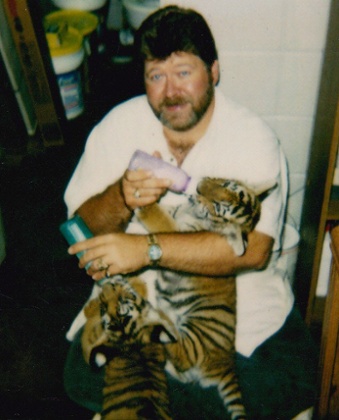 Right now, nobody’s happy. Animal rights groups are frustrated by their inability to move Tony into a sanctuary, while Sandlin is upset at what he sees as the meddling of outside groups in his business. The whole saga may end only when the tiger eventually dies.

There’s a faded photo in the truck stop of a younger, black-haired Michael Sandlin cradling a very small Tony in his arms. In it, Sandlin throws a slightly bashful smile at the camera as the tiger contently suckles on a pink bottle held firm in Sandlin’s right hand. For all the accusations of mistreatment tdirected against the truck stop, for all the questions about Tony’s living conditions, there’s no doubt the owner genuinely loves his animals. Sandlin doesn’t normally have much trouble holding forth about his tigers, but when asked what Tony means to him, he stops and pauses for a long time. “Tony is probably the biggest part of what’s left of what I consider to be my life’s work,” he says, eventually. “If there are no tigers here anymore I’ll probably sell and go ahead and retire because I’m not interested in operating the truck stop without the tigers. They’ve been here from day one. He’s no longer just an attraction. I’ve loved all of my cats, and as hard as times have got over the last 27 years, they never went without food or veterinary care. It’s not about the money anymore. It’s about the principle of it, about keeping him safe, and I think we’ve accomplished that.”

There probably won’t be any more tigers after Tony goes, last year’s exemption applying solely to Tony and not the truck stop in general. In terms of economics, the tiger novelty angle hasn’t worked – Sandlin says it has cost the business over $400,000, mostly in legal fees – but that is, of course, not the point. With both the truck stop and activists vowing to keep the fight going, the strange saga of America’s roadside tiger doesn’t look to be ending anytime soon. 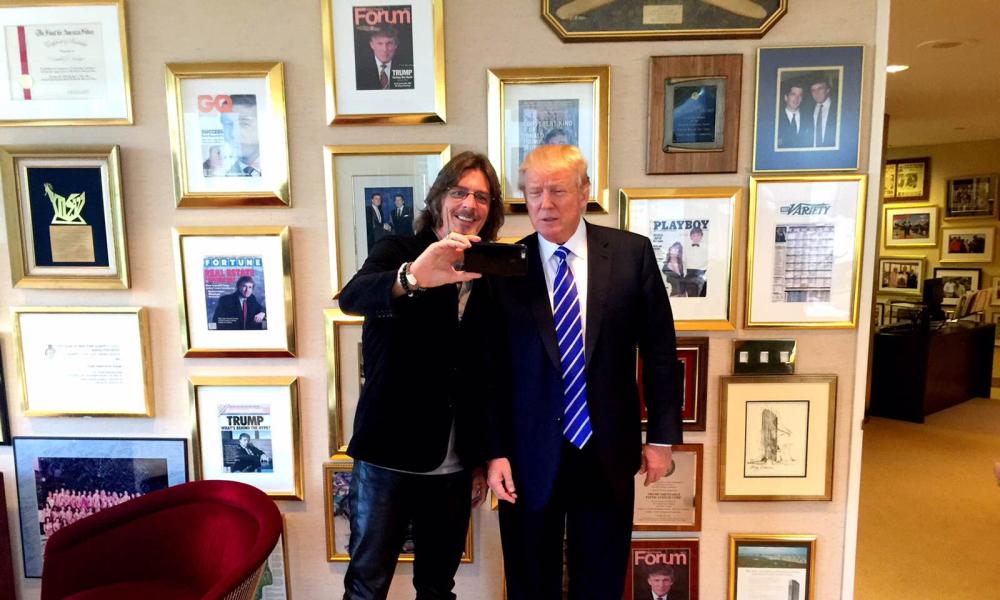 The Donald Trump show: 24 hours with the Republican frontrunner 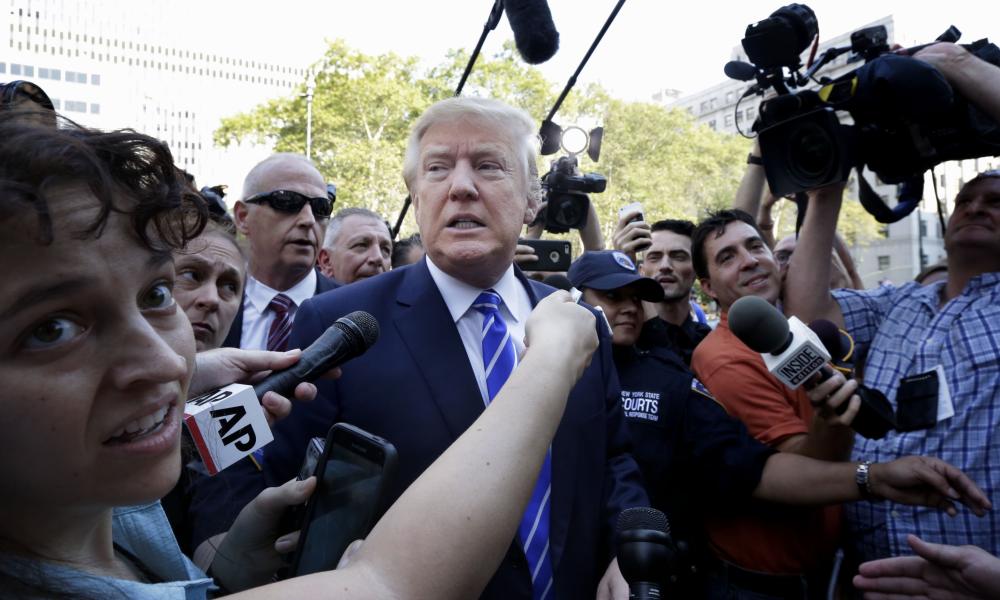 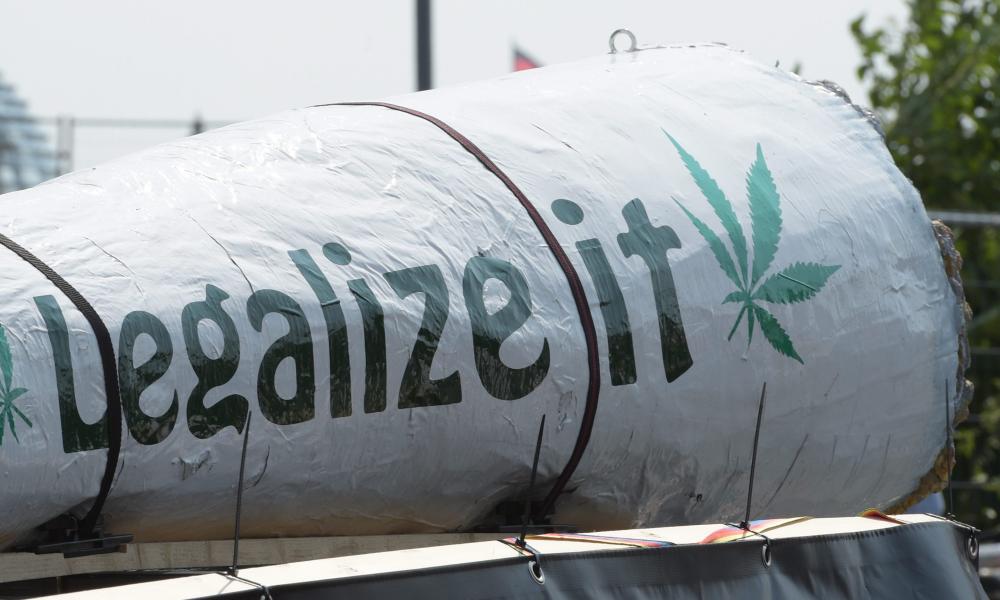 Ohio prepares to vote on marijuana legalization: which states will be next? 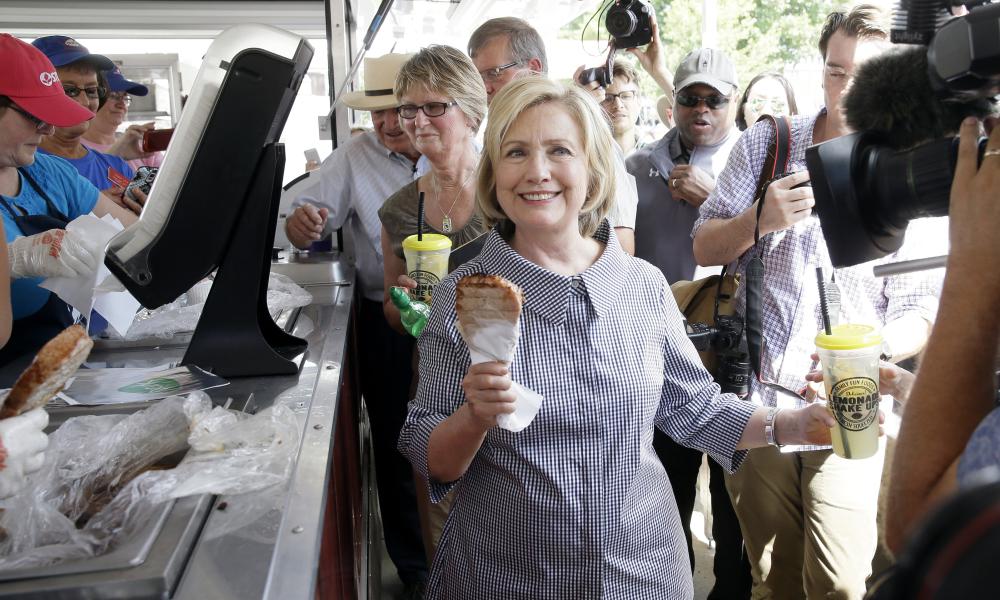 Trump, Sanders and Clinton take Iowa … and 2016 goes through the looking glass 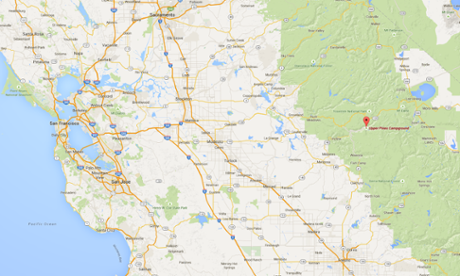 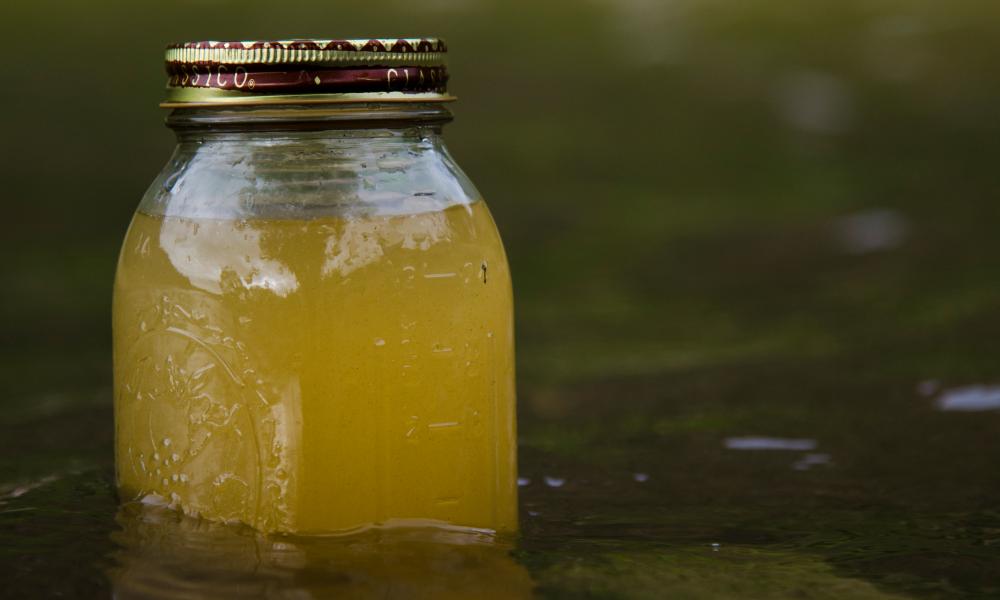